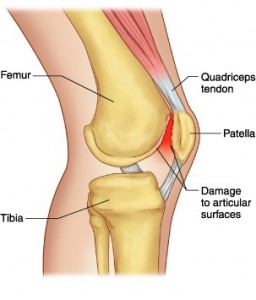 Posted at 12:16h in Uncategorized by marisa

An all too common knee injury is Patellofemoral Pain Syndrome (PFPS), commonly called “Runner’s Knee.” Other names can be used like “movie-goer’s knee” and chondromalacia of the knee. The pain is often described as dull and achy, and is generally located on the inside, outside or below the patella (“knee cap”). It can also be very sharp at times and may even cause the knee to “buckle” or give way, especially when running or going down stairs. Although not always caused by running, the name is reflective of one of the major causes.

–“Dull achy” pain on the inside, outside or below the knee cap that can be sharp pain at times

This condition is typically an overuse problem (not from a specific fall or twist) that arises secondary to malalignment between the patella and the groove of the femur (the “thigh bone”). There may be external factors that lead to this diagnosis, however it is most frequently due to biomechanical changes that occur over time from relative tightness and weakness in the surrounding soft tissue of the hip, knee, and even the foot.

In a “normal” knee, the patella tracks in a shallow groove of the femur when the knee flexes and extends (bends and straightens). If the patella is “off track” or overly compressed it will grind along the femur instead of gliding smoothly in the groove. This, over time, can cause discomfort or pain. The patella has the greatest point of contact with the femur during 45-90 degrees of knee flexion, which explains why people who have PFPS can experience symptoms when sitting (a non weight bearing position) as well as when squatting (weight bearing).

Some less than optimal biomechanical errors in running may also be correlated with runners’ knee. These are ‘overstriding’, where the stride length is too great leading to increased heel strike and increased shear force through the patella and failure to activate the glutes and hips on the weight acceptance phase of stance, thus allowing the knee to move too much inward. However, often runner’s knee can present from congenitally shallow grooves in the femur, tilted kneecaps or flat feet.

PFPS can be evaluated with a thorough biomechanical examination of the entire lower extremity by a Physical Therapist. Analysis of both static postures and dynamic movements, combined with specific muscle tests are used to identify structural and functional imbalances. A personalized treatment plan can then be developed based on the findings.

The usual suspects that cause an increase in pressure of the kneecap and malalignment are a tight IT Band, quadriceps femoris and hip flexors. Therefore it is imperative that these 3 groups be loosened up. The inability of the kneecap to track correctly in the femoral groove is also dictated by the quadriceps, so strengthening of the quadriceps is also paramount. There is also significant research that points to hip and glute strengthening being helpful to recovery.

By putting emphasis on loosening the knee and pain-free strengthening of the muscle groups above you can make significant gains to solving anterior knee pain. If stretches and strengthening don’t alone resolve the pain, a physical therapist will be more effective for returning you pain free and getting back to sport.