When back pain isnt your back: Sacroiliac (SI) Pain 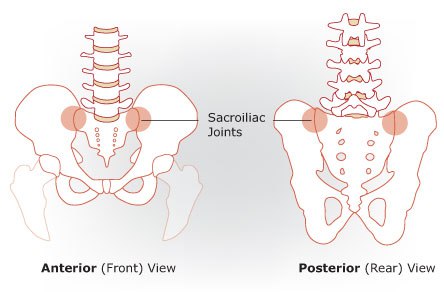 14 Jun When back pain isnt your back: Sacroiliac (SI) Pain

Posted at 23:20h in Uncategorized by marisa
Quite commonly clients come to see me for pain in the lower back that really is not ‘back’ pain at all. Very commonly occurring in runners because of the asymmetries of the stride and pounding nature of the sport, sacroiliac or ‘SI’ dysfunction is far more common that noted in the literature. This is because the majority of doctors and physical therapists fail to diagnose this condition properly, or may believe it does not exist.
For sure it exists. Anyone with one sided lower back pain right over the pelvis in an areas about the size of a quarter, right under the ‘dimple’ in the lower back can tell you it is very real.
Often also associated with pain radiating into the butt or leg, the pain from the SI joint can be either a dull ache, a ‘locked up’ feeling of the lower back or a pain radiating into the butt muscles.
The sacroiliac joint is a very small joint that joins the top posterior (back) of the pelvis with the sacrum (the fused bones that make up the end of the spine right before the ‘tailbone’). Since the pelvis is composed of two halves, there are 2 SI joints, one on each side, each laying right below the dimples that one can view on most people who are of average weight.
Because the pelvis needs to rotate as we swing one leg in front of the other, the SI joint is the point in the back of the pelvis where this swinging occurs. Although the joint movement is only a matter of millimeters, the failure of this joint to open and close properly will bring on pain as the body forces it to open.
Those with SI dysfunction may feel pain with transitional movements such as going from sitting to standing and rolling over in bed.
Besides pain, runners specifically may also complain that they are unable to take their normal stride length, since the joint is not coming along for the ride. They also note the area getting better with activity and worse after activity or with sitting or standing still. This is because as the joint gets circulation and warmth from activity, it can often loosen up enough to move more freely, and thus when the activity is over it resorts back to its stiff status. After awhile however, if you continue to run with the condition untreated, it will be less and less likely to let you get away with it!
SI joint pain is very different from low back pain and low back issues such as herniated discs, stenosis and other dysfunction and needs to be treated as such. Although it should be said that often times low back issues can bring on SI dysfunction. But SI joint pain in the absence of a back injury occurring first is most most commonly what we see in runners.
An important distinctions between back pathology and SI pathology is the area of pain but also the asymmetry the therapist will find on examination.
To treat SI dysfunction properly, one must correct the asymmetry in the pelvis AND coerce the SI joint to move more freely.  This is done by examining where the alignment issue is and by using techniques and teaching home techniques to correct the alignment, open the joint and restore symmetry. Asymmetries can be found either at the pelvis where one side has rotated forward or back relative to the other, or up or down, or conversely when one leg is structurally longer than the other, causing shearing forces into the pelvis. The former can be caused by a jarring moment of forceful movement or over time simply by one side of the pelvis and hip muscles being tighter than the other due to habitual postures or activities. The latter is determined at a young age by bone growth abnormalities. Although even though many people have been told they have a leg length discrepancy, generally its just a rotation of the pelvis that makes one side ‘look’ longer than the other. We call this a ‘functional’ leg length discrepancy, because the legs themselves are the same size. You need to find a therapist that knows how to look for the difference.
Another population that suffers higher incidences of SI pain is pregnant women. Because of the normal ligamentous laxity during pregnancy, this joint can often loosen too much on one side, making a rotation of the pelvis more likely. Although it can be calmed down and even fixed, often it is a bit more stubborn since the ligamentous laxity will not go away until after birth.
Since the treatment of this disorder depends on which side of the pelvis is involved and how it is involved, it is impossible to give specific treatment instructions. Without knowing which side and where your pelvis is off, you can only do general SI stretches and movements to loosen both sides. The best way to open the joint is by doing any type of ‘cat/cow’ yoga positions, whether on all fours, or seated, such as below. Doing this several times a day especially when sitting or standing long periods can offer some relief.
Other relieving stretches are child’s pose stretches and gentle piriformis stretching on the side that seems tighter when you stretch. Note: this might not be the same side as the pain. The most important way to fix this issue is to address where your asymmetry lies. So if the stretches (and some ice and rest) don’t fully alleviate your pain, see someone who can help.